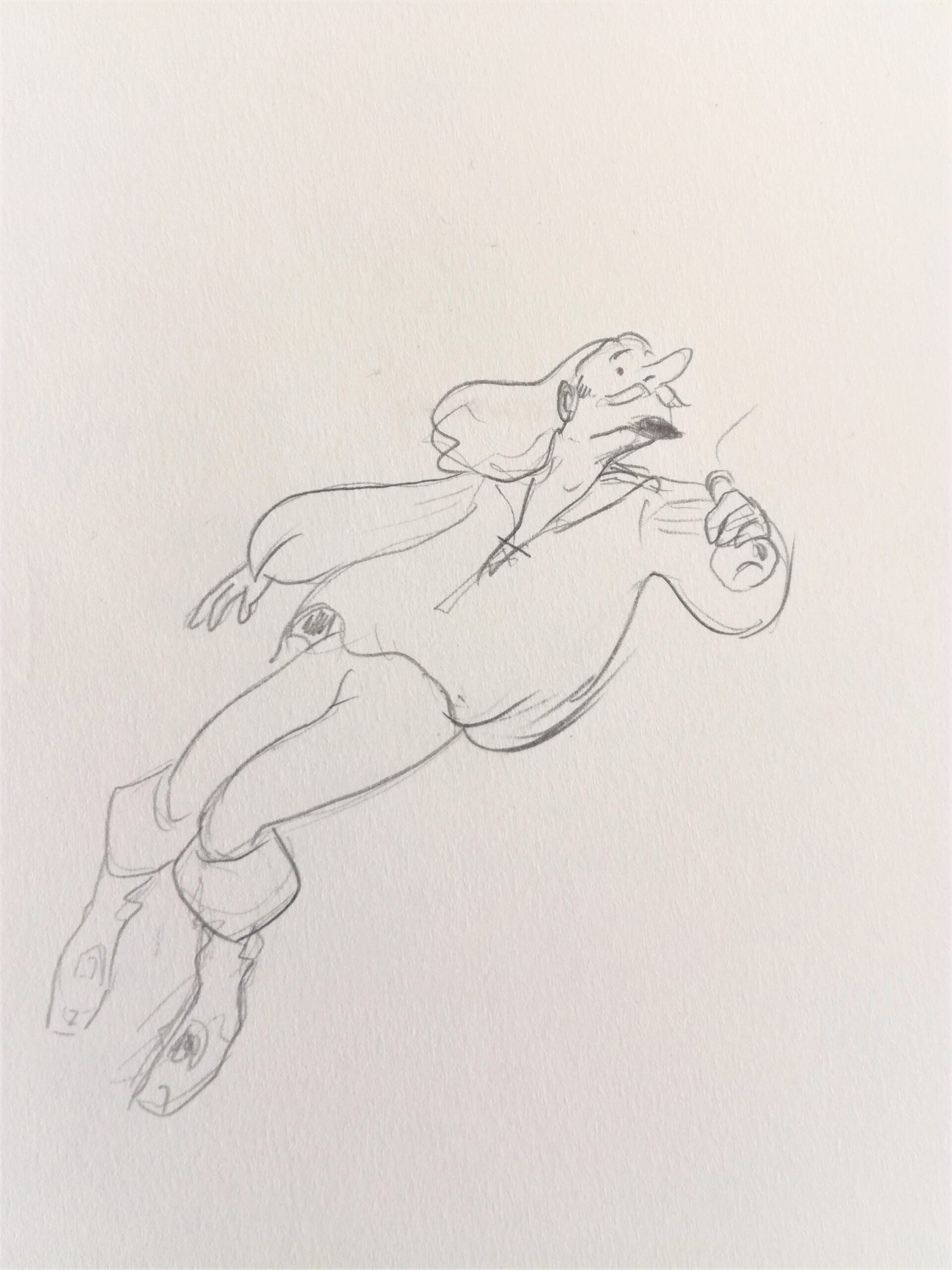 And welcome to my blog if you are new here.

Following my last readings I wanted to do an article in which I would have talked about Art, Illustration, Reproducibility and Walter Benjamin.

But unfortunately the lack of time forced me to postpone this project.
So I’m just dropping by to give some news and talk a bit about the projects I’m working on in this month of April 2022.

As some of you may already know, I am working with Virginie Gobert Martin on the design of an illustrated book.

I can’t share too much about this project in public for several reasons ; the most important being that I want to protect the author’s ideas until we have actually got it signed.

My Patreon subscribers have regular glimpses of this project, which is progressing slowly but which I am working on meticulously.

I don’t want to give a sloppy layout to the publishers we are going to approach and the story deserves my full attention so that the illustrations do it justice.

Moreover, if I take the time to design the graphic aspect of the whole and the appearance of the characters beforehand, the production will be all the more fluid once the contract is signed, whatever the deadline given by the publisher.
So I take my time but I don’t stay idle: I think a lot, redo certain sketches several times, rethink the settings, submit progress and ideas to the author…

And I also try not to become a perfectionist, otherwise the model will never be ready.

We decided to propose the text with a storyboard (which was entirely drawn up some time ago) and three illustrations, each giving an idea of the various formats we would like to include in the book: A5 or thumbnail, A4 and double page.
The first two illustrations are done and I am currently working on the final double page illustration for the book.

As this one will show the main characters of the story, I put all my concentration, my precision and my imagination into it.
That’s why if something doesn’t look right… or doesn’t satisfy me 100%, I leave it for a while so as not to spoil anything.

This ” freedom ” will no longer be available to me once the contract is signed and the deadlines set, so it’s now or never to give it to myself.

If you’d like to know more about the progress of this project and get a glimpse of the first drawings, I invite you to join my Patreon community.
The second subscription tier is €3/month and will give you access to articles and videos in which I talk about the project.

April’s exclusive illustration for my subscribers

Since I’m talking about Patreon and my subscribers, this is a great way to transition into the second project I’m working on right now.

Like every month, I create one or two illustrations for my subscribers (depending on the timing, the theme and the inspiration) which I then turn into a postcard and a bookmark (which replaces the sticker, I tell you why here).

I then send these counterparts to my subscribers according to their subscription tier (to know more about this, I wrote an article that summarizes everything right here).

This month, I was inspired by the French play Cyrano de Bergerac by Edmond Rostand, which I love.
Of course, I’m also inspired by the beautiful screen adaptation by Jean-Paul Rappeneau with the unbelievable and brilliant Gérard Depardieu in the role of Cyrano.

The first sketch, made while watching the film (or how to combine pleasure and usefulness), immediately gave me the inspiration to make the illustration and the bookmark in one go!

I won’t share my very first drawing with you here, as it is reserved for my Patreon subscribers who enjoy, among other privileges, access to the behind-the-scenes of my work.

But here’s where I am at the moment.

The scene is from the “No, thank you!” tirade, which I really love.

As I write this, the colouring has started but I still have some doubts about my palette… so I’m going to do some tests before going any further.

Anyway, in this illustration I want to remain faithful to

So I had a great time researching the real Cyrano again, reading articles, research papers or old France Culture broadcasts on the subject.

For example, here is a fascinating article: “Cyrano de Bergerac, ou l’homme qui avait la tête dans les étoiles” (Cyrano de Bergerac, or the man who had his head in the stars) written by Jacques Prévot in the magazine Littératures Classiques in 1991.

Unfortunately, all these links are for a French-speaking audience only, I’m sorry. If you have links to English research, articles, etc., please share them in the comments, as I would love to read them!

In 2021, Erica Schmidt made a film called Cyrano, based on Edmond Rostand’s play with the wonderful Peter Dinklage in the lead role.
I haven’t seen it, so I can’t comment on its respect for the play and treatment of the character.

However, watching the trailer… well, how can I put it?
It’s not Edmond Rostand’s Cyrano for sure…
First of all, the story seems to take place in the 18th century and not in the 17th century… as for the treatment of the characters.
Finally, I must admit that I only lasted 58 seconds watching the trailer.
Have any of you seen this film? And what did you think of it?
I’m curious to read your opinions.

Anyway, this exclusive illustration is an opportunity for me to delve into a fascinating work and historical figure.
How many people know the real Savinien from Cyrano de Bergerac?

As for me, I hope one day to buy his works and finally read one of the very first Science Fiction novels in the history of literature: Les États et empires de la lune et du soleil.

I must confess that I am not a great fan of the Modern period in history (nor in Art History).
Apart from the Elizabethan period (which I love), I prefer the Protohistoric, Medieval or Contemporary periods.

Nevertheless, Edmond Rostand and Alexandre Dumas have always helped me to appreciate the 17th century. The Three Musketeers, 20 Years Later and Cyrano have always made me want to delve into the inspirations of these authors and find out more about the “real” d’Artagnan (I recommend this great Arte documentary on the subject if you can see it) or Savinien de Cyrano de Bergerac.

Here is an idea for an illustration for the coming months: the Three Musketeers.
What do you think?
It wouldn’t be for now of course, but I’m keeping the idea in a corner of my head for later.

Anyway, I’ll post the final version of this illustration here as well as its postcard and bookmark versions.

So I’ll see you soon for more illustrated dreams! 👁️⭐☁️🌈