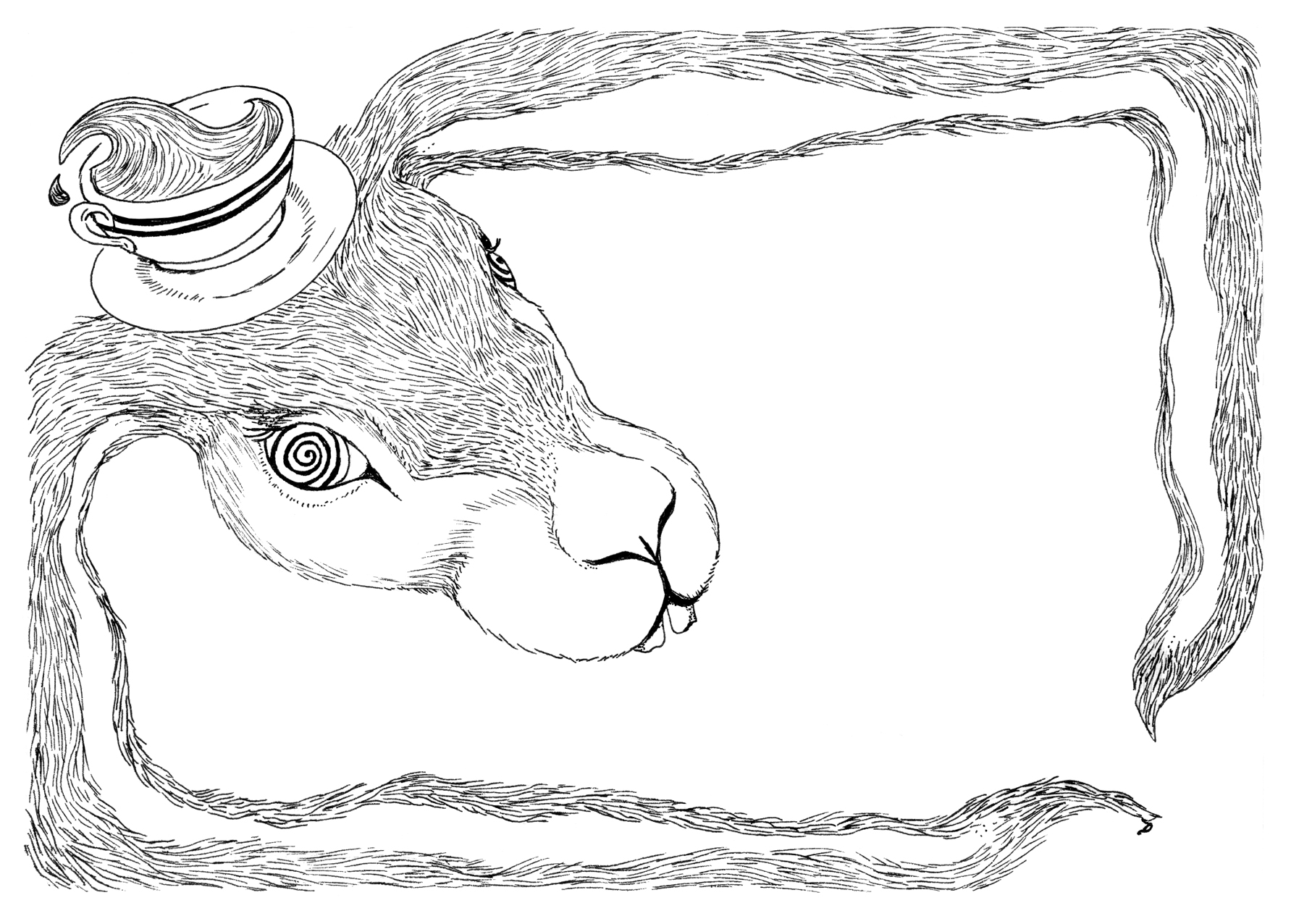 I hope you are well despite this sad world falling apart…

I’m back today to present you my Patreon exclusive creations for March…
There’s a lot to say about them, but I’ll try to keep it short, simple and not too specific as some things have to be reserved for my Patreon subscribers.

It’s hard to know what to say and on which platform…
How do you manage to be everywhere without repeating the same thing over and over again and giving priority to loyal subscribers?

This ink drawing could have been the exclusive April Patreon postcard.

As I was sketching this March hare, I thought it would make a great linocut.

So I asked my Patreon subscribers for advice: what would they like to receive in April?

They chose the linocut, of course.

As I had to transfer the final illustration to lino, I decided to finish the ink version first.

Of course, I had to figure out how to engrave it so that it would work graphically.

Inking the original drawing gave me a very different result than cutting of course, but it helped me to transfer the drawing to the lino.

The difference between the two versions (inking and cutting) is that I don’t have enough skill (and fine enough tools) to create the same lines and figure the hair.
In other words, I had to think about how I was going to make it stand out using only black and white.

Before engraving, I had to know which areas should be black, which should be left blank (white) and so on.

The two are so different from each other that I could sell the inked version in my shop! In practical terms, every time I create an exclusive work for my Patreon subscribers, it remains exclusive.

That is, the remaining prints of the monthly illustration are for sale on my shop but you have to log in with your Patreon account to buy it (you can subscribe for 1€/month by the way).

Given the difference between the inked and the linocut versions, I think I can sell the inked version without betraying my Patreon subscribers.
You know what I mean?

This illustration is very complex.
Not because of the skills I needed to make it, but because of its subject.

I am literally horrified by what is happening in Ukraine.

War is an unbearable thing and it’s amazing that in the 21st century we are still doing horrible things to each other.

Phosphorus bombs, in 2022, are they still being made? Seriously?

When I see what’s happening over there, I’m out of my mind, I’m shocked, I’m disconcerted by so much violence, horror and injustice.
But I am equally angry when I see what is happening around the world, because there are other wars going on right now:
Yemen, Ethiopia, Haiti, Myanmar, Syria, Afghanistan, Mali, etc.

However, I want to remain a humanist above all and not throw the baby out with the bathwater.
This is why I find it difficult to blame a whole people for the decisions of one ( mad ) man.

I also find it very difficult to understand how one can blame the culture of a country for what its leaders are doing at the moment.
Russian authors and musicians who died long ago never knew the person responsible for these atrocities. Can we really blame Tolstoy or Tchaikovsky for the war?
What role did they play in it?

So when a Russian costume appeared under my pencil while drawing this Alice, I hesitated.
But I decided to keep the drawing as it was and not to close the bottle of Russian culture.
I will continue to militate and act for peace (everywhere), but I refuse to have a Manichean and simplistic vision of things.

I understand that my Ukrainian friends who are suffering directly from this war find it harder to be moderate.
I don’t know how I would react in their place.

But there are people in my family who were deported by Hitler and yet we never stopped enjoying German music or literature.
That’s why I can’t stop loving Stravinsky or Prokofiev because they died in the 1950s or 1970s…

Anyway, this illustration was made exclusively for my Patreon subscribers.

Since I’ve decided to stop encouraging people to buy stickers for ecological reasons, I’m now offering a monthly bookmark instead from the third level of subscription onwards.
(If you want to know more about my motivations, I wrote a blog post about it, right here).

The illustration is associated with a quote from a Russian writer from an article he wrote in The Guardian condemning the war in Ukraine.

So here are the exclusive Patreon works for March 2022.
Not so funny, is it?
Madness is fun in Alice’s Mad Tea Party, but otherwise…

I’m sorry about that, I’d rather share fun and happy stuff than talk about such sensitive topics.
Unfortunately, due to the delay I had with the internet connection, I don’t have anything else to show you at the moment.

And I regret it because I have been feeling the need to paint lately.
Alas, I had to catch up first and… I haven’t done it yet.

Anyway, I have several things in the works, some “hush hush” and others more visible.

So I’ll be back here very soon with more illustrated dreams. 👁️⭐☁️🌈
Until then, take good care of yourself.
Bye