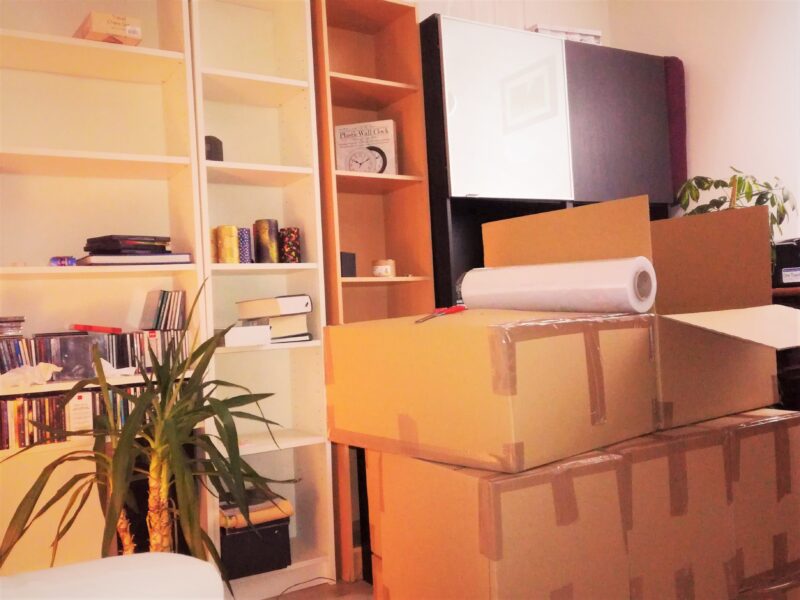 It’s been a while since I posted anything new on my blog, and for a good reason: I moved!

Very naively, I thought I would be able to resume my professional activities from the first of March, but that was until the unexpected and fiber network connection problems…

As planned, the lorry came to collect all our belongings on 27 February and in one go, everything was deposited in our new home.
Unfortunately, on Friday 25 February, we were surprised to learn from the SFR technician that although we were indeed eligible for fibre network, the installation of our rental was not quite right.

Indeed, the cable, available at the end of the road, had to find a duct to cross the garden and reach the house itself, located 50 meters away.

The following days, with the help of the landlord, we set out to find the hidden duct for the optical fibre, which was taunting us from its post at the end of the garden.
After several days of fruitless searching, the landlord finally called someone with the right equipment to find the buried ducts… otherwise we could have searched for a long time: they were nowhere near where we thought they were!

We then had to deal with the information about the condition of the long sought-after shaft.
It had been punctured by the previous tenants when they had planted stakes in the garden to build a kennel.

A new cable duct had to be installed before the SFR technician could be called back. So we changed the duct, made other trenches and manholes in the garden… and called SFR back for the fibre migration.

In the meantime we still had to work.

So we asked for an ADSL box to get a decent speed and give my phone, which was our only means of (poor) connection, a rest.
Unfortunately, despite the rapid arrival of the ADSL box, our line could never be activated because SFR assigned us a telephone number… from a home loctaed in the north of France, attached to another account… with €1,000 in unpaid bills!

In short, by the time we reported the problem to SFR, the appointment with the technician for the migration had already been booked for a few days and we had to cancel the ADSL connection to launch the migration to fibre before we could even get ADSL.

Today, we finally have an internet connection since… only one and a half days.
In total, we were cut off from the Internet for 19 days.
And yet, our liberal activities are essentially based on a good Internet connection.

Because, as usual, we had other surprises.
The last one being that there wasn’t enough fibre optic cable to pull it up to the floor where we work.
So our box is installed in the garage, on cardboard boxes, plugged into the only available socket (on the ceiling) thanks to an extension cable on a reel.

Of course, with such an installation, it’s impossible to run an RJ45 cable under the garage door to the basement and upstairs.
No.

We had to rush out and buy some USB Wi-fi keys to get the signal which (of course) is much lower than what we would normally get with a cable.
Finally, we are now connected, with a risky installation, but which works.

My companion can now teach his classes and I can once again accept freelance missions, manage my shop and my Patreon.

But what an adventure!

As Orange announces the dismantling of its copper telephone network by 2030, I seriously question the feasibility of “all connected with fibre network” by this date.

We are lucky enough to rent a house from 2004 in good condition and yet we have had nothing but delays and complications in migrating to fibre.
I can’t imagine the hassle in a restored old house (our long term goal).
When the time comes, I have a feeling it will be fun.

Anyway, I’m finishing setting up my work piece and very very soon I’ll be back this way with more illustrated dreams. 👁️⭐☁️🌈
See you soon!